CASSIDY PARIS – ‘talk about it’ 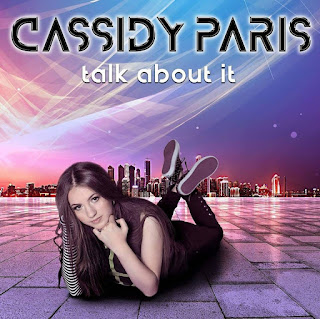 Cassidy Paris releases her debut single ‘Talk About It’, co written by Canadian singer Paul Laine (Darkhorse, The Defiants, ex Danger Danger) on August 1st. The song brings back hooks and a very catchy chorus that will be stuck in your head for days. Cassidy goes on to say, “I can’t wait for my debut single to be released. I plan on playing live anywhere and everywhere, whether it be unplugged with my acoustic guitar or with my band plugged in and electric”.

Although only 14, Cassidy Paris has grown up with music from a very early age. Her dad, a musician himself has taught her the ropes by attending concerts around the world. With influences ranging from the classics such as Heart, Kiss, Pat Benatar, Joan Jett, and Def Leppard to more recent artists like Taylor Swift(lucky enough to meet her idol Taylor Swift at the age of 8 years of age), H.E.A.T and Biters, Cassidy Paris is ready to make her own mark on music.

Cassidy will launch her single by playing a number of acoustic dates at a number of schools within Melbourne, Australia and will play two live shows as special guest to The Radio Sun in Tokyo, Japan in November 2017.

Get ready to TALK ABOUT IT!!

CASSIDY PARIS – TALK ABOUT IT – out August 1st via iTunes, Amazon Music etc.