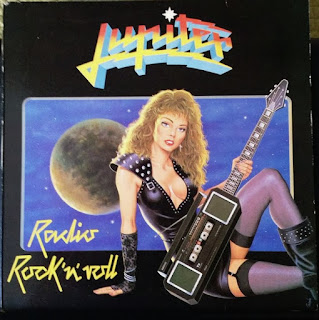 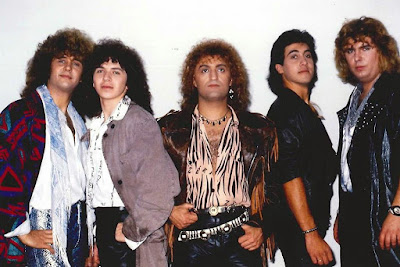 AORLAND: At first, Thanks for give the opportunity to make this interview and of course, congratulations for your new album and the amazing reception by your fans.

Thank you so much Antonio, that means a great deal to me and the boys from DARE knowing that our Spanish friends and fans are happy with the new album Sacred Ground. And we are very excited about our upcoming shows in Spain.

AORLAND: Why so long to publish this new album?

The length of time between Dare albums is usually around 3 years. We recorded most of the album at my studio here in North Wales, but a lot of the guitars were recorded at Vinny’s studio at his home. Sadly, half way through this new album Sacred Ground, my father became very poorly with Cancer. So that had a big impact on me and my family and obviously the recording. So yes it was very hard finishing off Sacred Ground. My dad fought very hard but passed away just before Sacred Ground was released. It was very hard for me singing the song ‘I’ll hear You Pray’ when I knew my father was dying. I dedicated that song to my mother and father; they had been together for 61 years. My father taught me to play the piano; he always loved listening to the DARE albums, so Sacred Ground will always be a special album for me.

AORLAND: In the other hands, a lot of fans are so happy to see Vinny Burn again enjoy to DARE. How did you Vinny convinced to return to enjoy the band?

Vinny and I go all the way back to the beginning of Dare, and we’ve been great friends for many years. His guitar playing is legendary, and he has become a rock in Dare, I know when ever we walk on stage, or start recording you can depend on Vinny to be there 120%. We both have learnt a lot from the early days, and this business can be difficult enough so having band members that are all on the same path, working for the good and future of the band is very important. The lineup of DARE is the most stable now than it’s been for a long time, , and I feel really creative knowing that. 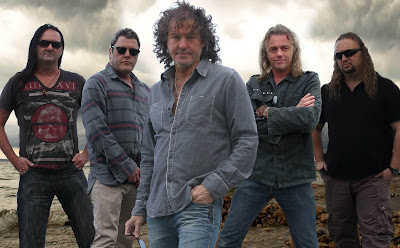 AORLAND: What things changed since your debut album inside DARE?

If anything as I say, just that we are all a little older and I hope a little wiser. It very important to have Faith in what you do musically, for me this is very important, having Belief in our music, and not straying from our goals. It can be very easy to chase musical trends, but our Dare fans have given us that faith, given us the strength to stick to our guns. I sometimes read the comments on youtube videos that fans have made and it makes me feel very proud and close with our fans, and our Facebook friends. It’s almost like a big family. Social media is such a great medium for getting to know the people who buy our records; ultimately they’re the ones that make everything possible.

AORLAND: What thinks about the 2 cd with B-sides launched in the past? Was an official cd or stolen songs?

VERY BAD! Well this is definitely a bootleg....which we’re not happy about at all. We try very hard to produce the best sounding albums for DARE, and when someone illegally copies old demos and recordings that were never meant for release, it makes me and the guys very angry and sad. More importantly it damages the band, financially and also musically. So who ever is putting these CDs out PLEASE STOP , and I would ask all DARE fans not to buy them.

AORLAND: Sometimes we wonder what it was that caused your second album was so different from your debut. It was a decision of your Label?

Yes Kind of! When we released Out Of The Silence, our main criticism from the press was that there were too many keyboards, which when you’re young and maybe naive, annoyed us. Guns and Roses had just become huge, so everything was heavy heavy heavy. So A&M Records suggested we make the next album heavier, so myself and Vinny set out purposely to write a Heavy album. Looking back now I think that was a mistake, not that we’re not proud of Blood from Stone, we are, it’s just that I think we wrote it for the wrong reason. We should of followed out hearts instead of trend. That was a valuable lesson I learnt all those years ago. With the Belief album, I wrote from the heart, hence the title ‘Belief’. That ethic has stayed with me ever since. 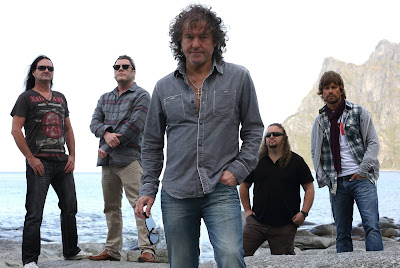 AORLAND: Do you remember your first visit to Spain with Dare?

Yes I think the very first time was an un plugged set with just myself and Richard Dews. Then DARE returned with the full band , we played with Kip Winger....who is a great guy. We love playing in Spain. I feel Spanish people are very passionate about music and life. It is always an honour for Dare to play in this beautiful country, and hopefully we will be playing more in the future. Viva Espana.

I can’t say I have one favourite, but I do have songs that are special to me. We were friends, Beneath the shining Water, King Of Spades, and I could go on, all have a special place in my heart, Silent Thunder, Abandon, Sea Of Roses, It’s for that reason why we will be putting out a ‘Best Of DARE’ album out maybe next year or the next. That will probably be my favourite album..haha.

AORLAND: On your new album all the songs are written by you ( Darren). All songs were written before Vinny arrive to the band again?

Well Vinny is a great writer, but over the last few years, since Belief, I got into the habit of the writing by myself. I lock my self away in my studio in the hills of North Wales for a year; I just like to work that way, alone with my thoughts. But also what many people don’t know is that Vinny is a brilliant Photographer, which takes him all over the world working, so the arrangement works well.

AORLAND: Will be sound more songs from “Blood from Stone” album in your next shows?

Yes we already play Wings Of Fire, and Reason most shows...mainly because they have a great energy. The new shows for Spain will include songs from every album, including of course Sacred Ground. I may post on Facebook requests…. I would like to know which songs the fans would like to here.

Well both guys are great players and have added their unique sound to the albums, but going back to what said earlier it’s more about what the song needs, to make it the best you can. That’s what is upmost in my mind and Vinny’s. It’s a very important part of the song writing process getting the balance right. Sometimes the production process can be harder than physically writing the song, knowing how to put a song down. Having said that, we did try and keep the guitars prominent on Sacred Ground. Vinny is such a great player, it seemed only fitting we kept them loud and proud. 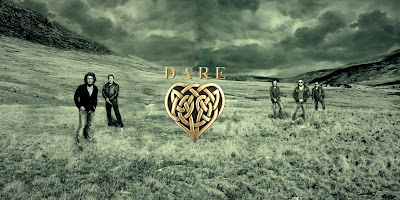 AORLAND: Talking about your new album, Are you amazed by the reaction of your fans? All the reviews are being great and your live concert at this moment are one of the most demands by the promoter. Did you expect such a reaction?

Well I always hope that people will like our music, obviously. But there isn’t any way of really knowing how an album will be received. I’m very happy that Sacred Ground has done so well, I’m looking forward to recording the next Dare album...exciting times. The best thing about the album being so well received is that it allows us to play in different countries, and get to meet our friends and fans that follow us on Facebook.

AORLAND: How was the idea that your son collaborate on the last song on the album? He played on guitar..

My son Paris is a brilliant guitar Player, he played on Circles on Arc of the Dawn, and also the main solo on Walk on the Water on Calm Before The Storm 2. He also demoed the last song ‘Along The Heather’ on Sacred Ground, so it felt right to ask him to play on the album....and he doesn’t charge me! Ha ha ha.

AORLAND: A difficult question for you...What´s album do you prefer, “Belief” or “Beneath The Shining Water” and of course, why?

Both albums are special to me...but if I had to choose I might lean towards Beneath the Shining Water. There is just something about the mood of the album I like dark & atmospheric. That’s how I like to see Dare’s sound. More like a painting with music.

AORLAND:  How was your experience in "Legends Festival"?

Yes Leyendes Festival was really great, Dare’s biggest Spanish show yet, hopefully we will be asked on more festivals in the future. It is always good to play of front of new crowds who might not necessarily be there to see Dare. We made a lot of new friends...and that’s what we like. So hopefully there will be many new people who haven’t heard of Dare at the upcoming shows in Spain….we hope to see all your readers there, that would be very special to us.

AORLAND: What awaits us in your upcoming shows in Spain

AORLAND: Thanks you very much for your patient and your kindness words. It´s a pleasure for me make this interview for our blog. 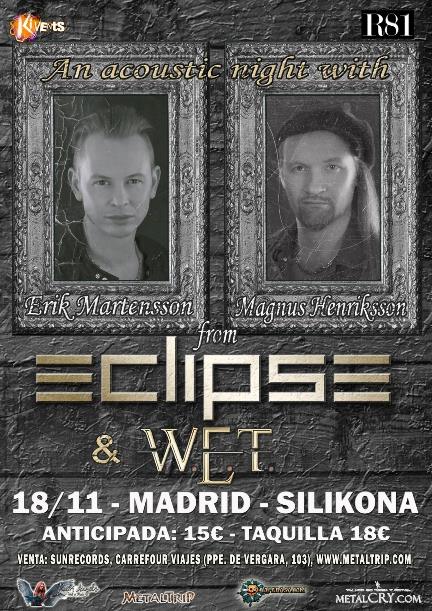 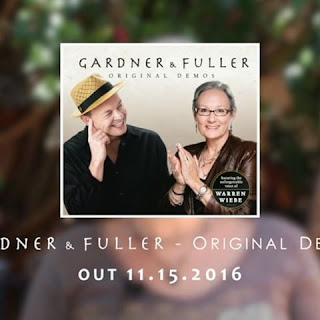 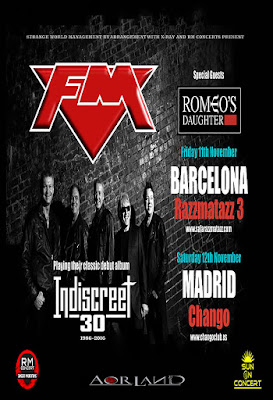 SET LIST
Romeo´s Daughter:
-Heaven in the backseat
-Attracted to the animal
-Touch
-Radio
-Bittersweet
-Alive
-Inside out
-I cry myself to sleep at night
-Wild child 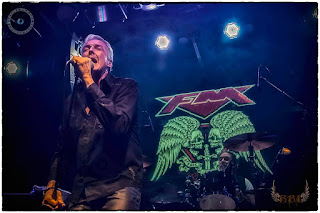 FM:
-Digging up the dirt
-I belong to the night
-Life is a highway
-Let love be the leader
-Frozen heart
-Someday
-Face to face
-Love lies dying
-The heart of the matter
-Hot wired
-Bad luck
-Tough it out
-That girl
-Burning my heart down
Bises
-Story of my life
-Other side of midnight
-American girls 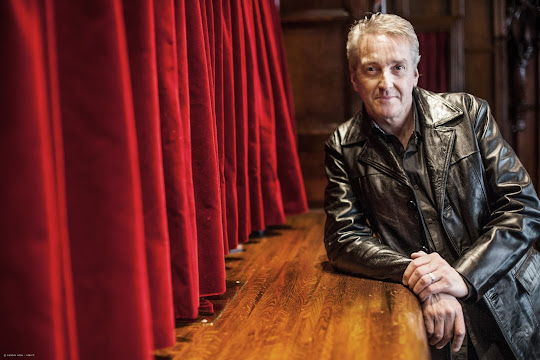 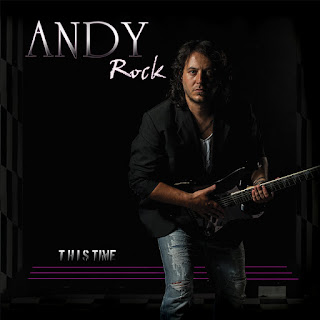 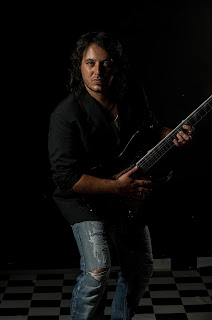 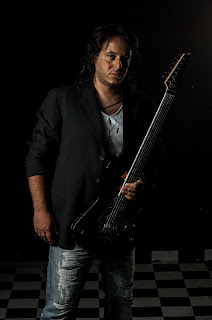 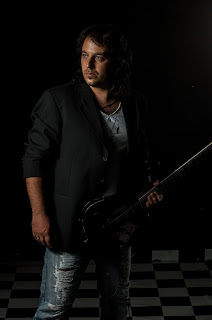 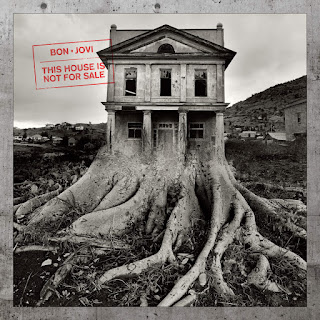 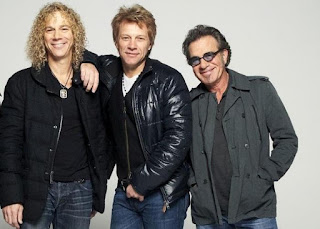 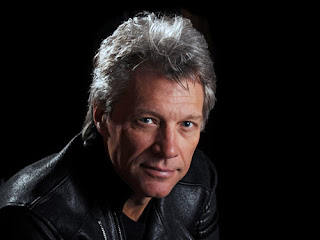 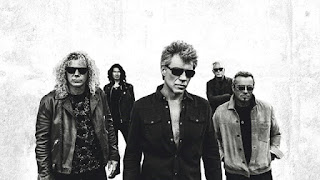